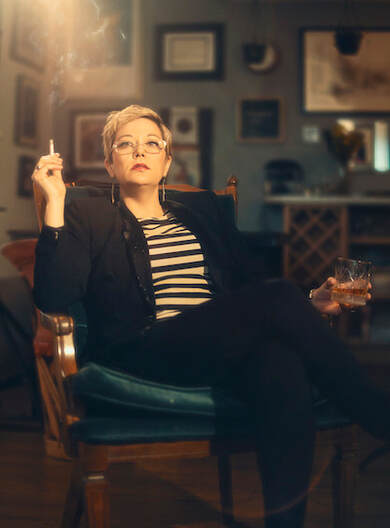 ​Born in CIUDAD JUÁREZ, raised in CHIHUAHUA and ZACATECAS.
HUMBLED  IN SoCAL, GROWN IN EL PASO,
​MARINATED IN  NEW MEXICO.
Left her heart in MANHATTAN.
Georgina Escobar is a Ciudad Juárez native and bicoastal playwright and director. She is a MacDowell Fellow, Fornés Writing Workshop Participant, National Puppetry Conference Writer, Djerassi Artist Resident and the recipient of the Outstanding Service to Women on the Border (2004) and the Kennedy Center Darrell Ayers Playwriting Award (2011). Her work has been featured in the Kilroys List (StoneHeart), The Texas Review (Matted), Los Bárbaros | Lxs Bárbarxs  (Pies Pa'Que), McSweeny's Anthology, and New Passport Press (Cósmica, translation). Her work has been produced across the USA and participated internationally in the ASSITEJ festival in Denmark and Sweden. Her plays (Then they forgot about The Rest, Sweep, Alebrijes, Death & The Tramp, Species:Human, B.I. (be), Ash Tree, The Beacons) have been produced and developed at INTAR, Clubbed Thumb, Lincoln Center, Bushwick Starr (NY), Two Rivers (NJ), Milagro (PDX), Aurora Theatre (GA), Duke City Repertory (NM), University of Texas El Paso (TX), and more. Her short story "And then I hit the glass" was part of the Talking While Female album available on Audible, and "Musings" on Girl Tales Podcast. She is the book writer for "Little Duende" (composer Robi Hager), and librettists for "Onset Was Sudden" (composer Linda Bouchard). Her shorts and other writing has been featured across the country as part of the "After Orlando", Climate Change Theatre Action, The Future is Female, and Becoming Porous initiatives. She serves on the Board of the El Paso Holocaust Museum, Marfa Live Arts, is on the Advisory Committee for the Latinx Theatre Commons, and an active steering committee member for the Climate Commons for Theatre and Performance. She currently serves as Assistant Professor of Practice (Playwriting) at the University of Texas at El Paso. Escobar is represented by 3 Arts Entertainment in Los Angeles, CA.
​

The New Yorker review, Then They Forgot About The Rest.